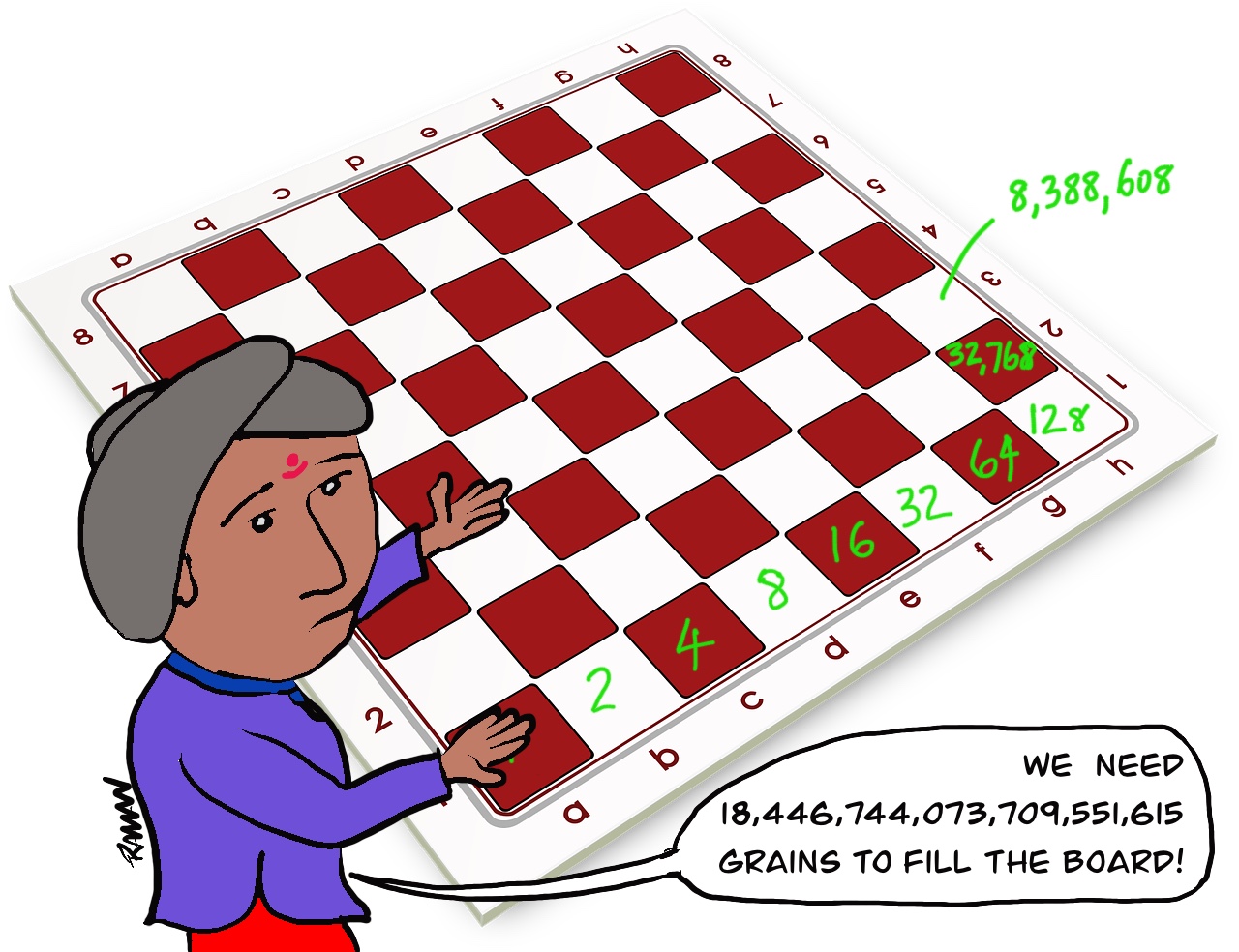 Why tiny gains are all you need for whopping returns

There once was a king in India who was fond of chess.

He would often challenge visitors to a game of chess. A wise man once accepted such a challenge.

The wise man beat the king in the game. A good sport, the king asked the man to name his reward.

The humble man replied, “O, King! All I want is a few grains of rice. Please give me one grain of rice on the first square of the chess board, two grains on the second square, four grains in the third, and so on, doubling the number of grains of rice with each square and covering the entire board.”

Perplexed by such a small request, the king immediately ordered his minister to fulfill the man’s request.

The worried minister swallowed nervously and replied, “Sire, we have a problem. There are not enough grains of rice in the entire world to accommodate this request!”

He went on to explain by listing the number of grains of rice needed to fill each successive square of the chess board.

and so on, reaching

This is estimated to be around 210 billion tons of rice, far outstripping the entire supply on earth!

It’s anyone’s guess what the fate of that humble man was, having defeated the king twice.

Compound interest is the eighth wonder of the world. —Albert Einstein

We can replace rice grains and chess squares with anything that makes sense. The math will be the same.

Let’s say we adapt these to dollars and time.

If we start with $1 in year 1, and double it each year, we get to astronomical sums of money well within our lifetime. In this scenario, it takes 20 years to grow that single dollar to over a million dollars. And we can cross the $100 million mark in year 27, all from that single dollar!

If you began with a starting capital of $10,000 like most financial houses report for the sake of comparison, the same million is attainable in just 7 years. The graph below shows how this growth happens.

This, of course, is assuming that you can log the doubling of capital each year like clock-work. Who are we kidding? Let’s infuse a little realism.

We took a hasty step of saying that each square on the chess board was to be equated to one year. The results were shockingly optimistic.

Let’s think again. Each square is really not a fixed amount of time. It is the amount of time you need to double your capital. Right? Doubling from square to square was the interesting phenomenon.

So, we can still start with $1 on the first square, but consider different time frames for what each square means.

This is where the Rule of 72 comes in.

Once you know your own realistic rate of return, it just needs to be plugged into the Rule of 72 formula and voila! You get the time to double.

Take a look at these examples of time to double your capital, achievable with some realistic annual rates of return:

So, you can see that a chess board represents not just 64 years of doubling. Even under best of conditions, it means at least 384 (64*6) years with consistent annual returns of 12%. Good luck living that long and maintaining that kind of return with any consistency!

For us mere mortals, the investment horizon is somewhere in the range of 30 to 50 or 60 years. For many, it’s even less because they start later or often don’t keep up with it.

The power of compounding is always at work, but it truly shines through for accounts that are typically held for a long time to give it a chance.

It begs the question whether it’s the compounding or just the fact that you’re keeping your money invested for a long time that makes it so powerful. In other words, what’s so special about compounding?

Choices for Power of Compounding

To get to the bottom of this, let’s consider three simple scenarios for handling a chunk of money you have for a rainy day:

In the first case where you keep your money under your mattress, barring calamities like fire, flooding, or theft, that money is waiting for you to pick up at any time and spend. It doesn’t grow in time and stays the same forever.

In the second case where you keep the returns under the mattress, your money is growing but your returns are not. This is called simple interest. Your investment is returning you some money every year, but you are not letting that grow.

In the third case, the returns are plowed back into the same instrument where you invested your money. Your original money and the added returns are all growing at the same rate. This is compound interest. You’ll expect this to give you the most amount of cash to spend when your rainy day arrives.

To properly compare these options, we need an example.

Let’s say you have $1M that you want to save for a rainy day. (Bear with me; you can do this calculation for any amount. Why not make it interesting?)

Take a look at how long it takes to double it in each of the scenarios above.

In other words, compounded investment accelerates the time to double by 28%. [It takes off 14 years out of the 50-year time horizon for simple interest. The percentage saving in time-to-double is (14/50)*100=28]

Interestingly, compound interest saves 28% of time-to-double over simple interest regardless of the interest rate you get on your investment. Here’s how that happens.

Just as compound interest leads us to the Rule of 72 for returns up to 12%, simple interest always adheres to the Rule of 100. Since the interest never grows, and since doubling implies a return of 100%, the time taken is simply 100/(percentage rate of return).

Comparing compound and simple interest schemes with an annual rate of return r, we get

So, compounding does shave a good chunk of time to grow the principal as compared to simple interest.

Compounding, by shortening the time to double, makes it possible to pack more number of successive doubling of the capital in your lifetime.

The true power of compounding

A 28% saving of time to double is not shabby. But the true miracle of compounding goes well beyond.

The chess board story demonstrated the power of successive doubling: Starting with just a grain of rice and doubling in square after square to seek a fantastic reward. Not stopping at one doubling but extending it to 4x, 8x, 16x, and beyond was the key. We can use the same idea in investing as well.

Let’s compare the performance of simple and compound interest in achieving these factors of growth.

Quadrupling, or a growth of initial capital to 4x means that there is 300% addition to the capital. With simple interest, all of this increase needs to come from the returns on the original capital.

With compound interest, however, only two doubling are needed. In other words, two successive applications of the Rule of 72 will get you there.

Assuming r is the annual rate of return for either type of investment, we can write these mathematically as

What this means is that going for a 4x growth with compound interest takes only 48% of the time it would take with simple interest.

By using this type of calculations for other multiples of growth, we can plot the following graph of relative performance for the compound interest. The graph indicates what percentage of time is saved by using compound interest to reach the growth target.

Since the graph represents saved time, higher numbers are better. You can see that whereas compounding showed only a saving of 28% for the first doubling, it saves 88% of the time on the fifth doubling, yielding a 32x growth. At that yield, compounding gets you there in just 12% (or roughly an eighth) of the time it would take you with simple interest!

Aggressive, yet safe, growth for an average individual investor generally means an investment in stock index funds yielding an average 8% per year. Historic stock returns support this observation. Rule of 72 showed that this means each doubling of the capital takes 9 years for this investor.

So, four doubling (or a 16x growth) will take 36 years. If it is possible to start early and stay with the program, some investors may be able to eke out another doubling that will result in a 45 year investment horizon and will yield a 32x growth.

Compounding, by shortening the time to double, makes it possible to pack more number of successive doubling of the capital in your lifetime.

The outsized returns resulting from this exponential behavior is the reason it’s common wisdom that compounding is an essential part of smart investing. No wonder Albert Einstein reputedly said, “Compound interest is the eighth wonder of the world.”

Why is simple interest even relevant?

You may ask why we need to be concerned with simple interest if compounding is so pervasive and is obviously superior.

The answer is that in many forms of investment, compounding is a conscious choice for you and requires you to take action every time you get some return on your investment. If you fail to take action, you’ll be left with simple interest. While most mutual funds build in reinvestment of the periodic returns back into the fund, not all types of investments do so.

If you directly invest in bonds and other debt securities, they may have periodic interest or dividends. They are paid out in cash and it’s up to you to invest these proceeds in some form. Even when you invest in stocks, you may need to explicitly invest the dividends paid out. The common scheme is to buy additional shares of the securities after the payout.

So, unless you are on top of this game, you could miss out on the advantages offered by compounding.

The good news is that there are several investment vehicles available to you where compounding is automatic and you can enjoy the power of compounding without lifting your finger after the initial set up!

For that simple step you take, you are rewarded with up to 88% acceleration of returns over simple interest. It is possible to translate a mere 8% annual rate of return into growth of capital to a whopping 3200% over your lifetime.

That is the true power of compounding!